What is Junk Silver and Why Would Anyone Buy It in 2022?

We’ve heard American minted silver coins referred to a dozen different ways. But our favorite is – real money – because that’s what it is.

Junk silver was our final connection to circulating currency backed directly by any physical precious metal.

And until 1965, the US Mint produced every dime, quarter, and half dollar with a 90% silver alloy (the remaining 10% was copper). The US Mint also produced silver dollars from 90% silver through 1935, but they are in a class to themselves and not mixed in with the rest of the junk.

Today we’ll focus on the silver sea of coins that ceased mintage over half a century ago. We will discuss junk silver’s history, contemporary significance, and why an increasing number of people today hoard the stuff!

The Full History of Junk Silver

Junk Silver has its roots in the founding of the United States. Its existence is even written into the constitution and is why many collectors opt for the title of "Constitutional" silver. Drawing inspiration from other prominent national currencies around the late 18th century, the newly founded US Mint decided to include silver in this nation's earliest coinage.

The nation's first coins included gold, silver, and copper, and the US Mint has created dozens of classic designs. As smaller denominations of money had far more purchasing power a few hundred years ago, minting the nation's dimes, quarters, and halves from silver made perfect sense.

In the early days, the US Mint carried designs across almost every coin denomination. For instance, from 1796 through 1807, the copper half cent, silver dime, silver quarter, silver half dollar, and more all featured the identical Draped Bust design. The US Mint minted the Capped Bust design from 1815 until 1838 and the Seated Liberty design for over 50 years, from 1838 until 1891.

As you can see, coin series weren't minted for consistent lengths of time, and the earliest mintages are extraordinarily desirable and highly collectible. Silver coins in this period carry such a numismatic or collector value that they aren't classified as junk silver.

Modern junk silver begins with the Barber series (1892 – 1916), the last silver coin series to carry an identical design across the entire dime, quarter, and half dollar range. 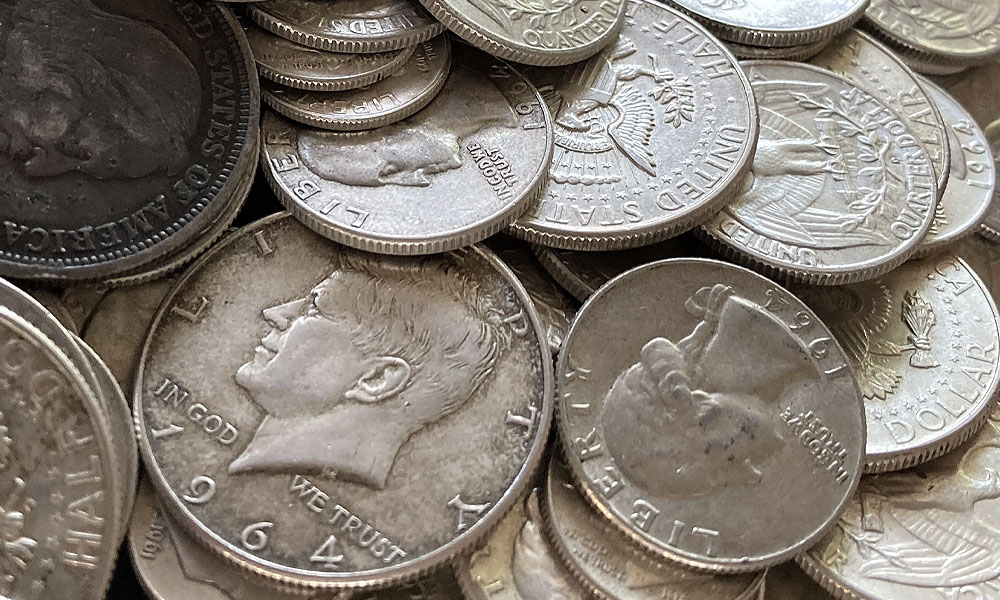 In 1932, the US Mint launched the Washington quarter program, which features the profile of America's first president. Special series, including the 50 State quarters and the America the Beautiful quarters periodically refreshed the quarter's reverse. However, President Washington is still prominently featured on the obverse side to this day.

1945 witnessed the introduction of the Roosevelt dime, to honor the late president, Franklin Delano Roosevelt. And 1964 marked the release of the final new issue silver coin from the US Mint, the Kennedy half dollar.

In 1965, the US Mint started using a more economical copper and nickel, "cupro-nickel" alloy to produce the Washington quarter and Roosevelt dime. The US Mint downgraded the Kennedy half dollar to a 40% silver-clad composition from 1965 through 1970.

Today, these three coins are only available in 90% silver through collectible proof sets. Sadly, the circulated versions are all a 91.67% copper and 8.33% nickel composition.

The Best Kind of Junk Silver

US Minted coins are recognizable and trusted, even these old silver examples from over 50 years ago. Most of the designs are familiar, even today. However, this can lead to confusion if you don’t know how to differentiate between the post-1965 coinage produced from the cheaper cupro-nickel alloy.

For this reason, some investors prefer to focus on Franklin half dollars and Mercury dimes. These two coins were never produced in the cheaper cupro-nickel alloy but can still be acquired in relatively decent shape, considering their respective ages.

But be aware of the different years and their varying silver composition. For instance, 40% silver-clad Kennedy half dollars were minted from 1965 through 1970 to use up the silver inventory the government had stockpiled. From 1971 onward, the Kennedy half joined the rest of the US Mint coinage using cupro-nickel alloy.

Dealer premiums fluctuate with demand (and current demand has reached unprecedented levels), but historically junk silver tends to be the most affordable, trusted silver investors can buy. Modern fractional silver pieces can carry considerable premiums over their melt value due to a high fabrication cost per piece. Still, junk silver serves as a fantastic entry point into hyper-fractional retail silver.

Preppers are naturally attracted to junk silver coins for their recognizable nature and uniform divisibility. Junk silver coins, especially dimes, are the perfect medium of exchange when bartering during times of crisis. Even if you don’t subscribe to end of the world scenarios, junk silver is still the cheapest way to accumulate trusted, fractional silver.

We also recognize that some junk silver might appear dirty. Right out of the gate, new collectors see this and attempt to clean their coins, and we recommend against this. For one, it’s a messy chore, and two, it can hurt the resale value of your coins when selling. Most collectors prefer coins that still have their natural patina intact. 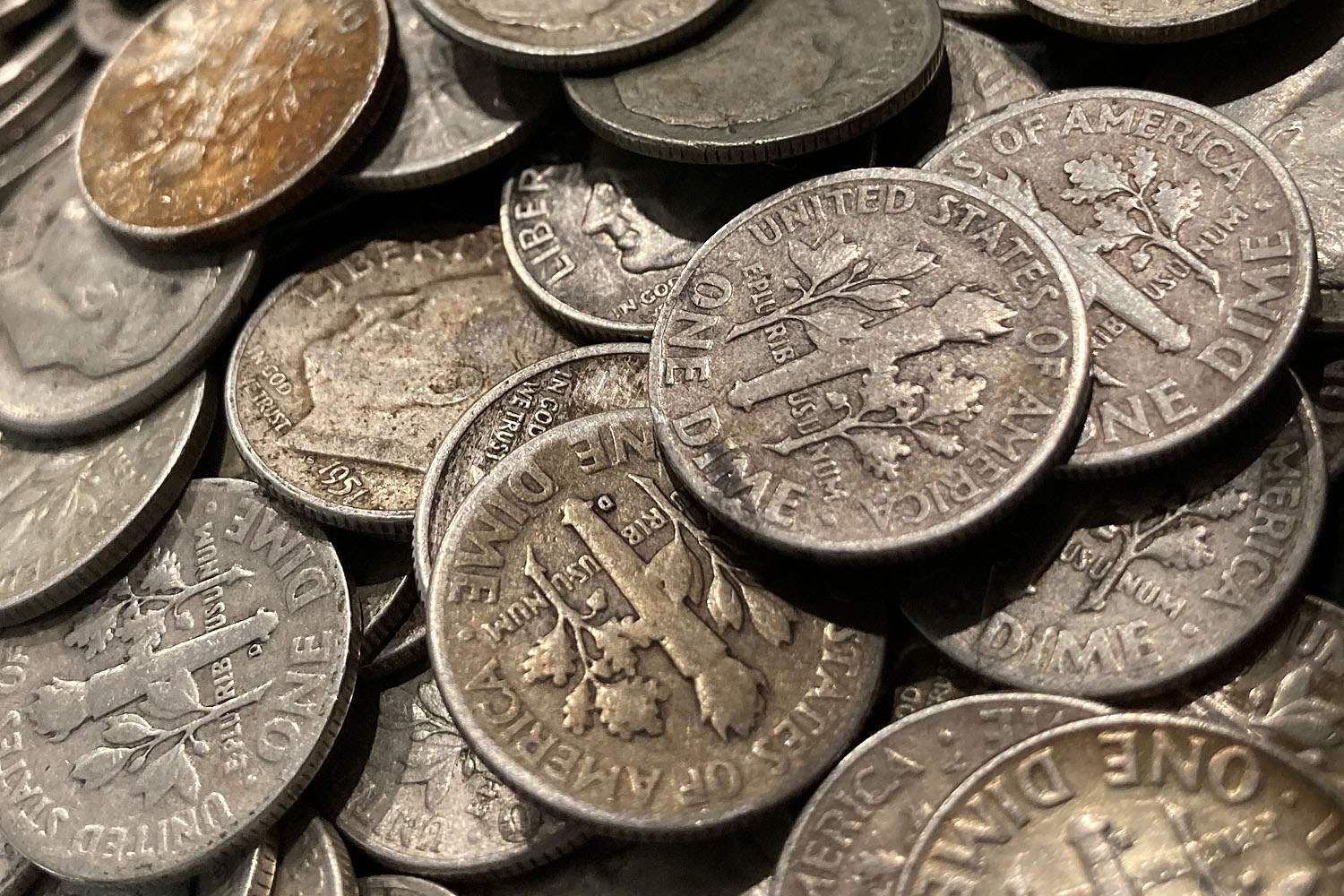 You just wanted to buy some coins and be on your way, but alas, there's some homework involved... it's junk silver math. We'll try to keep it brief and painless, but since 90% silver coins are all fractional ounces and are less than pure, tracking how much silver you're getting can seem like a chore.

Remember that circulated halves will have a bit of wear and average closer to 0.715 troy ounces of 99.9% pure silver per $1 FV. This mostly explains why higher grades of junk silver command premium prices.

When selling junk silver, many coin dealers weigh your coins and subtract for any additional worn-away silver (not something we do, but it does happen).

The term junk silver has become an endearing misnomer because we know it’s anything but junk. These wonderful silver coins serve a valuable purpose and place in everyone’s collection. Junk silver is history in your hands and one of the best ways to connect with the past while protecting your future. Grab a bag today!