Trials and Tribulations of Mining for Gold: How the Experts Turn a Profit

Hitting the mother lode and striking it rich is one wish that crosses everyone’s mind at some point in life. Claiming a $7 million vein of gold or stumbling across a $1.7 million solid gold nugget with nothing but a metal-detector is the stuff dreams are made of. It’ll get your heart racing.

Gold prospecting has the allure of adventure and freedom, and the possibility of getting rich quick attracts new investors to the hobby every year. That being said, pursuing it professionally is a hardy lifestyle choice that few are cut out for.

We’re sure some of you reading this are huge fans of the hit TV show Gold Rush and some of the included concepts will already sound familiar. Whether you’re a seasoned expert or a complete novice, by the end of this article, you’ll have a solid understanding of gold’s origin and the mining techniques used to extract it today.

4.5 billion years ago, a planet-sized "giant impact" with Earth formed our moon but also displaced heavy minerals that had settled in the deeper layers. Some of this displaced gold would form rich deposits in the upper layers of the crust.

Another theory points to a series of asteroid impacts after the giant impact, around 4 billion years ago. These smaller impacts peppered the Earth’s surface and injected gold into various terrains that would later become accessible to our civilizations.

We’re not scientists and won’t attempt to guess how every ounce of gold reached our home planet. The reality might be some combination of these theories, or perhaps an even greater puzzle is yet to be solved.

Either way, a geology background is an essential prerequisite for modern mining, or at least if you want to become effective at locating and recovering the dense yellow metal. That is because you’ll find trace amounts of gold just about anywhere on the planet. Still, the commercially viable, concentrated deposits are almost exclusive to areas with more significant geological activity, such as along fault lines and mountainous regions.

Over very long periods, pressure from tectonic plate shifts pushes gold-rich material towards the Earth’s surface. This material carries gold (and other heavy elements) which settles in the crust to form gold-rich deposits.

Some of these gold-rich deposits, also known as a "lode," are subject to gradual erosion that distributes the gold in a predictable pattern, usually through a series of river streams. Experienced miners can trace the path that gold travels from lode to eventual resting place, likely around prominent creek beds. Mapping out these ancient river systems helps experts choose the best spots to dig for gold.

Profitable placer miners have developed their formulas for success. Most of these formulas are capital intensive, but you can also get started with the investment of just one pan. 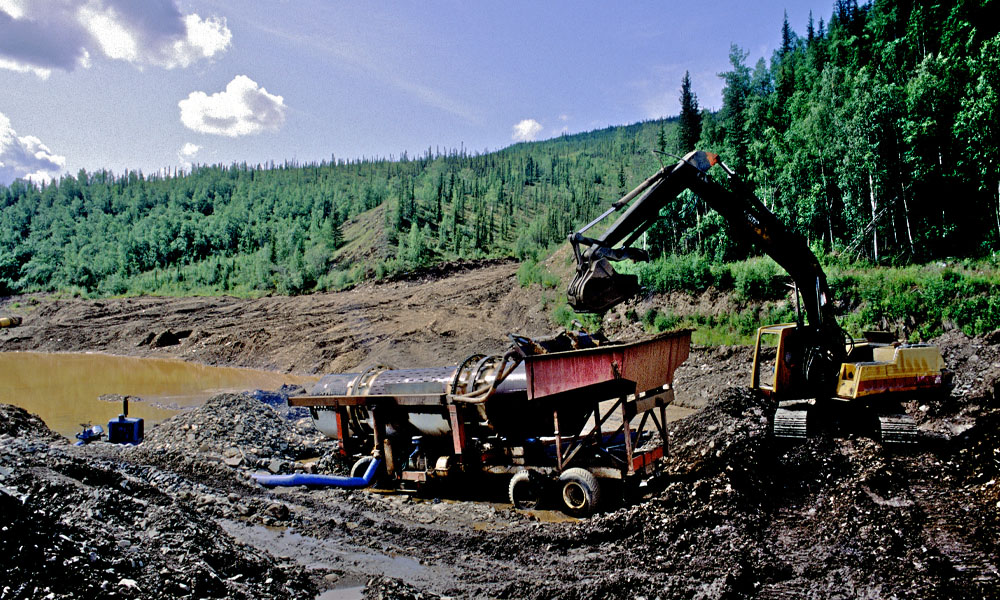 If you break down the placer mining process to its most simple terms, we’re just describing an elaborate (and profitable) form of "washing rocks." And this is most apparent when watching someone pan for gold.

Panning for gold is the most common form of placer mining and a recreational hobby for most participants. Anyone can start today with just a $10 pan, but equipment costs increase exponentially as the desire to catch more gold grows.

The key to successful placer mining is understanding the geography of gold-rich areas and becoming knowledgeable about the river systems. The goal being to determine where loose deposits of fine gold are likely to settle as the river fans out.

Water is the main reason the fine gold reached the mineable deposits in the first place, so it only makes sense that water (access to lots of water) is the main ingredient in every placer mining operation.

Trommels are giant horizontal rotating cylinders that churn the paydirt as high-pressure waterjets spray the material. Screens throughout the trommel cylinder allow the gold-bearing material to fall to the sluice box below. Trommels generally process fewer tons or cubic "yards" per hour but excel in regions with sticky, clay-packed dirt.

Conversely, shaker decks work by vibrating a large platform that causes the paydirt to move across it while high-pressure waterjets pummel the rocky material. The deck floor has fine screens that allow the gold-bearing material to fall through to the sluice box run.

The sluice box is a series of water channels with riffles, or bumps, that disturb the water flow and helps the heavy gold nuggets settle into specialized mining mats. The sluice box run is where most of the fine gold is eventually recovered.

Sometimes hydraulic methods are used in conjunction with traditional placer mining approaches to help remove low-yield top layers "overburden" or break down paydirt for later processing through the wash plant.

Hydraulicking is an old-fashioned technique still used in the modern mining era. Colossal water spouts, called monitors, blast powerful streams of water hundreds of feet and miners use them to cut through permafrost layers and carve out a hillside easily. It’s awe-inspiring to witness.

With placer mining, the gold is relatively simple to access, as long as you know where to look. But some gold deposits haven’t endured enough geological erosion for placer undertakings and hopeful miners must rethink their approach.

When Mother Nature refuses to do the heavy lifting via soil erosion, gold miners must find alternative ways to tap directly into the source. Enter lode mining, also known as hard rock mining.

Human impatience has been a force for many incredible accomplishments, and where there’s a will, there’s a way. In the case of hard rock mining, the Barricks and Newmonts of the world will get their hands on that gold, as long as the math adds up of course.

Hard rock mining is inherently more expensive than placer techniques due to the capital-intensive processes required for extracting gold ore beneath the surface. Suppose drill results confirm ample concentrations of gold ore (think millions of troy ounces). In that case, the mining outfit will engage in a multi-year project to explore every inch of the gold deposit to capture as many troy ounces as possible.

So how do the gold miners access these subterranean lodes?

Access is gained by either tunnel mining or digging up an ever-expanding, massive open pit. Factors such as surrounding terrain, depth of the deposit, and the environmental impact determine which method is more appropriate.

Open pit mines offer more immediate access to the ore in question, and there’s a reason all the largest mines on the planet operate as open-pit. The ability to scale the project simply by boring wider and deeper is an attractive attribute to large mining companies who must answer to their shareholders.

In open pit mining, dynamite is utilized to blast quartz (and other material) free from the surrounding terrain so that the gold-rich material can be gathered and processed through crushers. Rock trucks carry load after load up never-ending ramps to deposit this material at a mill for further processing. The final gold weigh is easier to separate from this pulverized quartz rock.

On top of that, the process will sometimes require months (even years) of working through red tape before a shovel ever touches dirt, which is why the largest mines on the planet are funded and operated by publicly traded corporations.

Extracting gold from the ground is an expensive challenge that bankrupts more and more aspiring miners every single year. But the most determined individuals lean on their experience and a modern toolkit to achieve profitability in this unforgiving landscape.

We can also see how the cost to bring investment-grade gold to market puts a floor under the price, at least when taking delivery of the physical metal.

Gold miners start the arduous production chain that PIMBEX completes with a beautiful display of the finished retail goods. Check out the excellent prices on our extensive gold bullion showcase today!