The American Eagle Coin Program is entering its 35th year of production, and the US Mint is celebrating this milestone in style. In bold fashion, the reverse side on each American Gold & Silver Eagle Coin is receiving a stunning redesign for 2021. This is a momentous occasion as the US Mint does not revamp coin designs often. Their flagship bullion offerings are enduring and unwavering in their designs, but the time for change was right, and we are left with an impressive new series to collect for years to come!

The Gold and Silver Eagle bullion coins are leading precious metals offerings, prized for their iconic beauty and unparalleled global recognition. These bullion coins were instant classics upon their release in 1986, and the timeless designs have never vastly altered. Now, on the 35th anniversary of the program, both coins received major facelifts… or rather, tail lifts! That’s right, both the Gold and Silver Eagle debuted brand-new reverse designs for the 2021 release year. Both obverses also received mild refreshes, and a new security feature to help combat counterfeiting.

The American Gold Eagle Coin is an instantly recognizable piece as its obverse is borrowed directly from Augustus Saint-Gauden’s 1907 design for the $20 Double-Eagle Gold Coin. Many coin experts and enthusiasts consider Lady Liberty’s design in forward stride the greatest in US Mint history. This design will receive a few touch-ups, but overall, remains true to the original. The original American Gold Eagle Type 1 reverse by sculptor Miley Busiek featured a family of eagles situated around their nest. 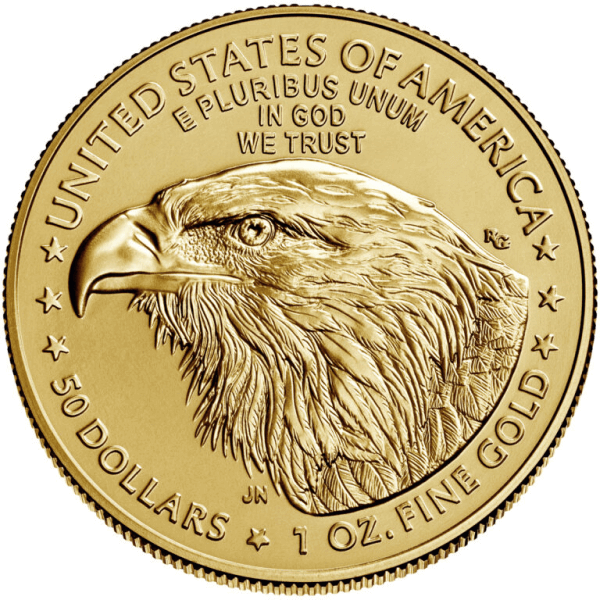 
The redesigned American Gold Eagle Coin (Type 2) reverse was selected from dozens of submissions through the US Mint Artistic Infusion Program, and Jennie Norris’s “eagle-eyed” rendition prevailed. This American Eagle is stunningly close-cropped to display the head at profile address. The close-up is a highly detailed, striking image! Each denomination of American Gold Eagle, including 1oz ($50), ½ oz ($25), ¼ oz ($10), and 1/10 oz ($5), will proudly feature the Jennie Norris Type 2 design.

An equally popular offering from the US Mint, the American Silver Eagle Coin is the world’s best-selling silver bullion coin. Building on America’s Silver Dollar tradition, this 1 oz silver bullion coin has been reliably meeting strong investor demand for several decades and shows no signs of slowing. The American Silver Eagle’s obverse inherited its looks from the 1916 Walking Liberty half dollar but always omitted the initials of original designer Adolph A. Weinman. 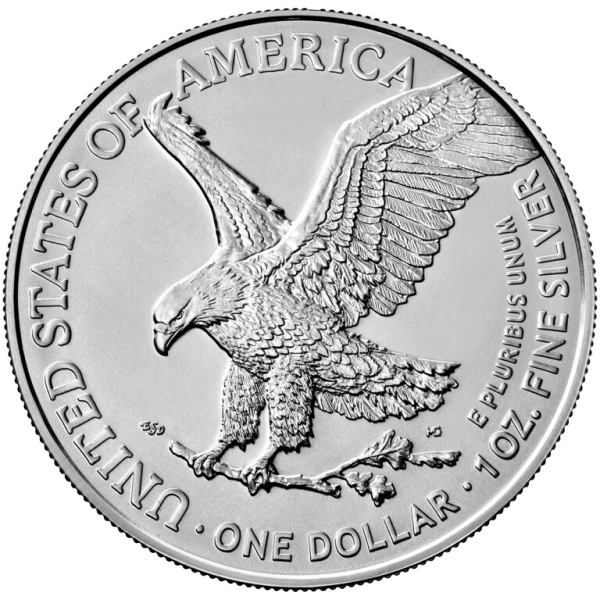 
Now the American Silver Eagle obverse design will feature Weinman’s signature mark, directly under the phrase “IN GOD WE TRUST.” The original reverse featured sculptor and later US Mint Chief Engraver John Mercanti’s iconic Heraldic Eagle design. In contrast, the new Emily Damstra Type 2 design showcases a magnificent eagle in descent, clutching an oak branch in its talons. Like the 2021 American Gold Eagle (Type 2), the 2021 American Silver Eagle (Type 2) design was selected through the US Mint Artistic Infusion Program, highlighting the incredible talent pool working with the US Mint.

A notable feature on both the Gold and Silver Eagle bullion coins is the introduction of a new security feature. Interestingly, each coin arrives from the US Mint intentionally missing a reed on the edge which will be placed on different spots depending on the year of production. By law, the US Mint can only propose coin redesigns every 25 years, so these new American Gold and Silver Eagles have years of production ahead.

Check out our selection of US Mint Eagles and witness your portfolio soar!