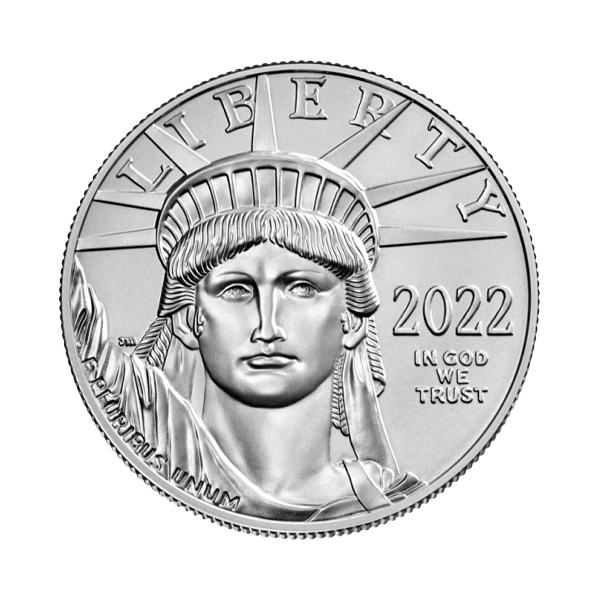 The American Platinum Eagle bullion coin is a premium platinum offering from the US Mint and cherished by retail investors worldwide.

The obverse design of “Liberty Looking to the Future” by then sculptor and later US Mint Chief Engraver John Mercanti features a close-up shot of Lady Liberty’s face staring boldly into the distance. The word LIBERTY is inscribed over Liberty’s head, and the year of issue and motto’s In God We Trust and E Pluribus Unum are included.

The reverse side of the American Platinum Eagle features an American Bald eagle flying over a sunrise, with UNITED STATES OF AMERICA inscribed overhead. Hallmarks denoting the 99.95% purity, 1 troy ounce weight and the $100 denomination are also marked. The 1 oz American Platinum Eagle is fully backed by the US Mint for weight, content, and purity.

Each 2022 1 oz American Platinum Eagle arrives in Brilliant Uncirculated (BU) condition and can be ordered as single 1 oz coins, in mint tubes of 20 coins, and Monster Boxes of 100 coins.